here is the third update of the Endless Bookshelf during the pandemic year 2020, when time has seemed at once to dilate and to compress. It has sometimes been difficult for me to write new work in a sustained manner. Blurred lines, or the deadline of no deadline. Others may enjoy virtual conferences but these have not attracted me or prompted me to finish a story the way that a scheduled reading slot at Readercon always used to. It has, however, been a year of many good books old and new. 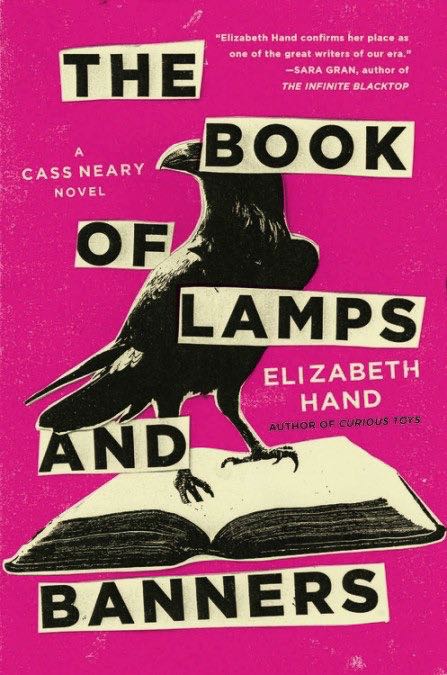 — Elizabeth Hand. The Book of Lamps and Banners. A Novel. Mulholland Books, [2020]. I am the dedicatee of this book, and perhaps more. It is a signal honor to be part of the latest in Liz Hand’s chronicle of the adventures of Cass Neary. I had read some early versions of the novel in typescript, but when I got my copy on publication day in September, I was compelled afresh. As Cass says, ‘I couldn’t rest.’ I read it straight through into the early hours of the morning. A pretty intense philosophical object is at the heart of the novel (see below under recent reading). Disqualified from reviewing the book and constrained by my own conscience from naming it the best book of the year (or declaring a tie with The Private Life of Books), I am free to urge you all to read the novel. I am pleased to present

A Singular Interview* with Elizabeth Hand

Henry Wessells The London of the Cass Neary novels always seems rooted in lived experience. How did you come to the house of Harold the bookseller?

Elizabeth Hand You’re absolutely correct that nearly everything in the Cass novels is drawn from my own experience (with a few exceptions — murders, fatal overdoses, ritual sacrifices, etc.). Harold Vertigan’s rare bookshop-cum-home is no exception, though as you well know, Harold actually lives and works in the NYC metro area.

For the book, however, I transplanted him to North London, to a particular minuscule enclave, Vale of Health, a hamlet in Hampstead. I came across it some years ago while wandering on the Heath, one of my very favorite things to do in London. Vale of Health is a tiny village hidden toward the upper part of the Heath, with a very few very narrow winding roads and mostly small old houses, some linked by cobblestoned alleys lit by old-fashioned lamps — they resemble some lost corner of Narnia.

The whole place appears utterly charming and otherworldly (not excepting the parking area filled with caravans, trailers, and retired food and ice cream trucks). So of course I knew I would have to use this lovely setting as the scene of an awful murder: the fictional Harold, with his wide-eyed delight at all things, his mild eccentricities (bare feet, seersucker in winter), impeccable taste (fine champagne), and deep knowledge of the book trade, could only live (and die) in a place like the Vale of Health. His real -life counterpart, on the other hand, will be discovering rare books and edible mushrooms for decades to come on this side of the great grey water.

* I thank my friend Michael Swanwick for this useful conceit.

— Ng Yi-Sheng. Black Waters, Pink Sands. Math Paper Press, [2020]. This newest book from the author of Lion City presents two recent performances written by Ng Yi-Sheng: Ayer Hitam: a Black History of Singapore, and Desert Blooms: the Dawn of Queer Singapore Theatre. Ayer Hitam is a remarkable history of the world through an examination of the history of Black people in Singapore.

During this year, Seth Davis has brought many stories by Avram Davidson into audio book format, and initiated a monthly podcast The Avram Davidson Universe. I was happy to be a guest: it was a fun conversation with Seth Davis and a chance to consider “O Brave Old World!”, one of the stories from The Other Nineteenth Century. https://www.buzzsprout.com/1310005/6138964-the-avram-davidson-universe-henry-wessells-o-brave-old-world

Other guests have included Ethan Davidson, Eileen Gunn, and Michael Swanwick, who named Avram Davidson as “the best American short fiction writer of the twentieth century’.

The release of The Booksellers documentary to a worldwide audience. https://booksellersdocumentary.com

Tom La Farge (1947-2020) died on 22 October. Tom was author of The Crimson Bears (2 vols., 1993-95), a modern classic worthy of a wider audience. Harvard class of 1969 (and former president of the Harvard Lampoon), with a doctorate from Princeton, he was the most literary man I have ever known. Quietly and without heeding fashion or compromising his vision, he wrote his books. He taught a generation of students in the English department at Horace Mann School. I knew Tom since 1993, and wrote about the early phase of his literary career in an essay for the New York Review of Science Fiction, now available here:

Tom’s interest in writing with constraints, approached ‘dialogically and not ideologically’, led him to form the Writhing Society, some fruits of which can be found on its blog, http://writhingsociety.blogspot.com. He had recently completed The Enchantments, a series of three novels published 2015-18. Tom is survived by Wendy Walker and his son Paul La Farge.

My review of the remarkable fantasy of historiography and ultimate travel book, Hav (2006), originally published in the New York Review of Science Fiction for April 2007: 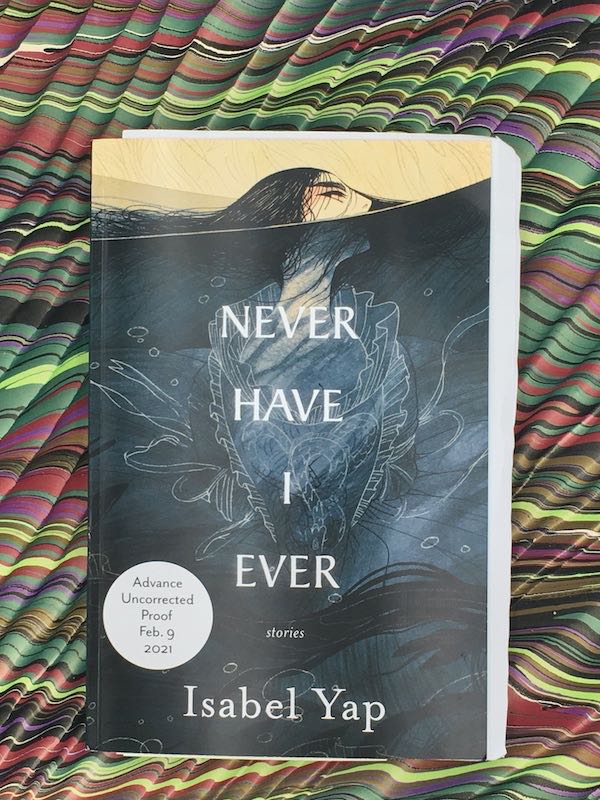 — Isabel Yap. Never Have I Ever. Stories. Small Beer Press, [forthcoming, February 2021]. Fantastical stories, published 2012-2018, by Manila-born author Isabel Yap, with three stories original to this collection. This arrived in today’s mail, and I am eager to read it! 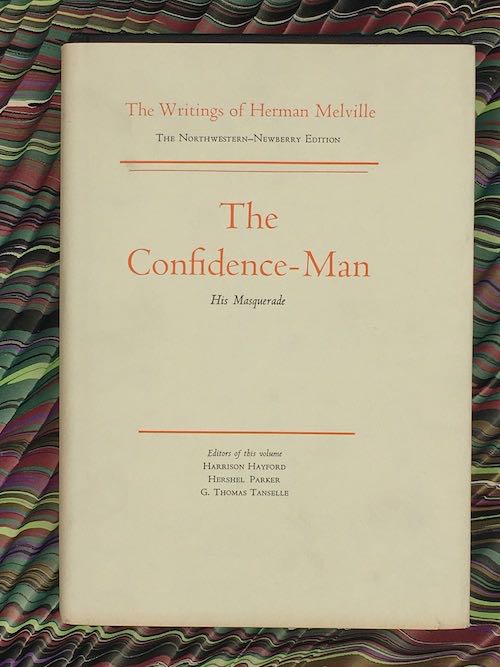 — Herman Melville. The Confidence Man His Masquerade [1857]. Northwestern University Press and the Newberry Library, 1984. Edited by Harrison Hayford, Hershel Parker, G. Thomas Tanselle. Northwestern Newberry Edition, volume ten. ‘As among Chaucer’s Canterbury pilgrims’, all along the river shore and on the planks of the Mississippi steamboat Fidèle, a work that cries out for performance. To read it is rewarding work.

I am re-reading Melmoth the Wanderer (1820) in small bites, in the Penguin Classics edition (I have read it in first edition and in the 1892 Bentley edition); and over the past months have read several of the Travis McGee novels of John D. McDonald. I have been reading or re-reading at Samuel L. Clemens in the Oxford Mark Twain, a hybrid uniform edition: photofacsimile texts in standardized format with great new essays (Ursula K. Le Guin’s essay for The Diaries of Adam and Eve is outstanding; and Toni Morrison on Huck Finn). 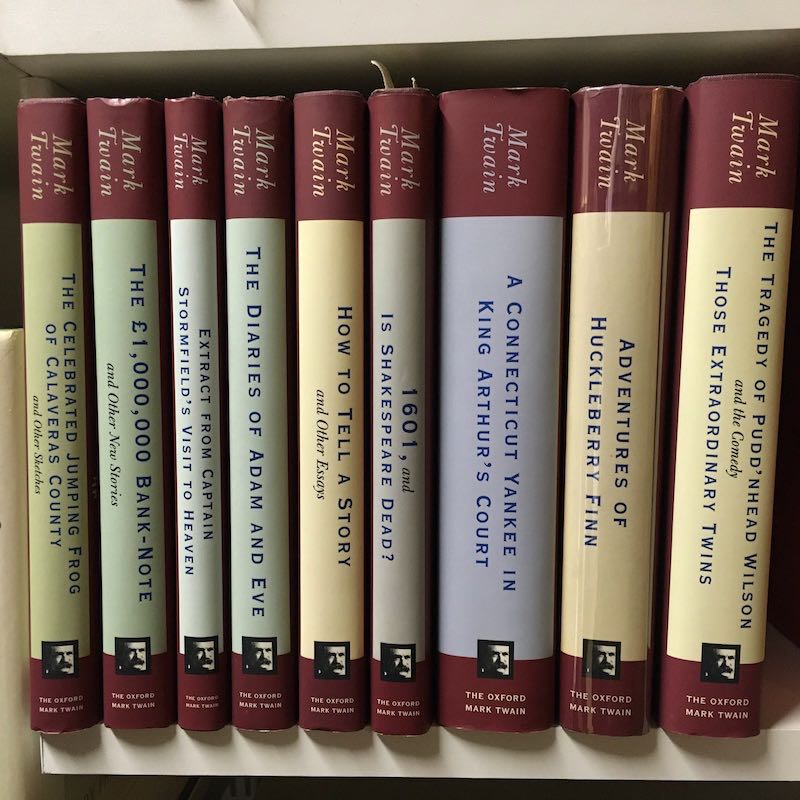 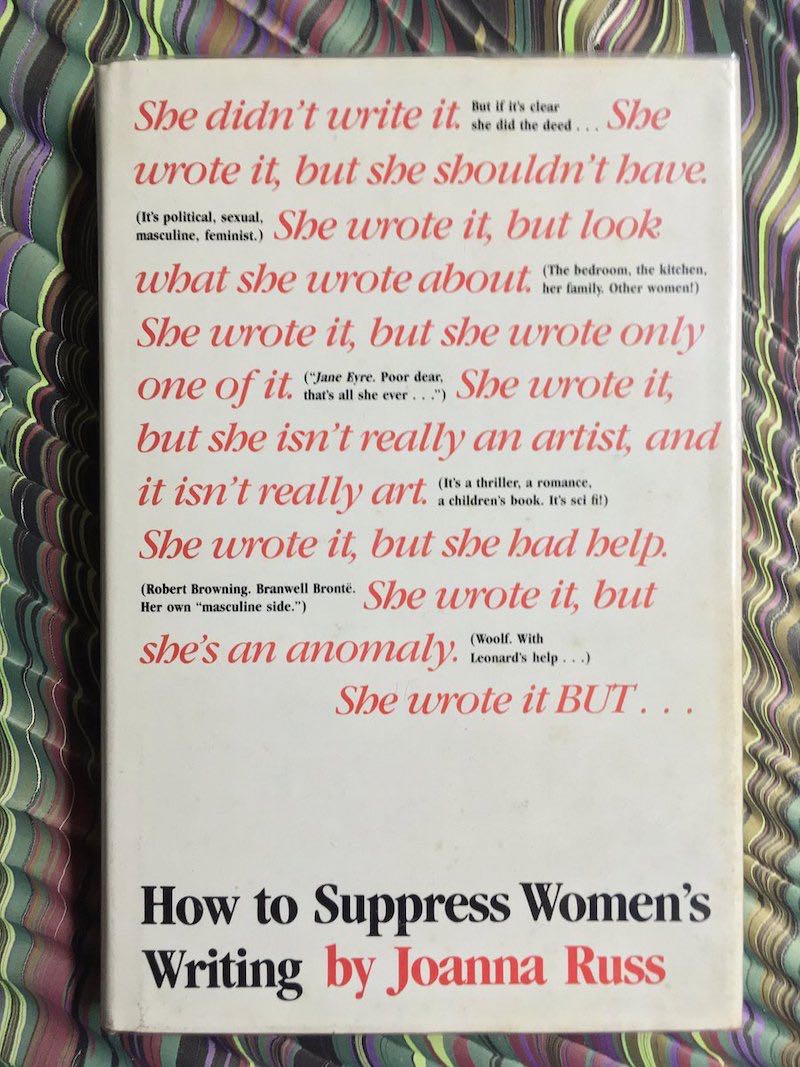 — Joanna Russ. How to Suppress Women’s Writing. University of Texas Press, [1983]. Always a delight and a provocation to read: ‘growth occurs only at the edges of something’. See also below, in the Commonplace book.

— Tom Mole. The Secret Life of Books. Why They Mean More than Words. Elliott & Thompson, [2019]. This was fun. Clearly the author and I share some interests and predilections beyond the chance similarity of titles. 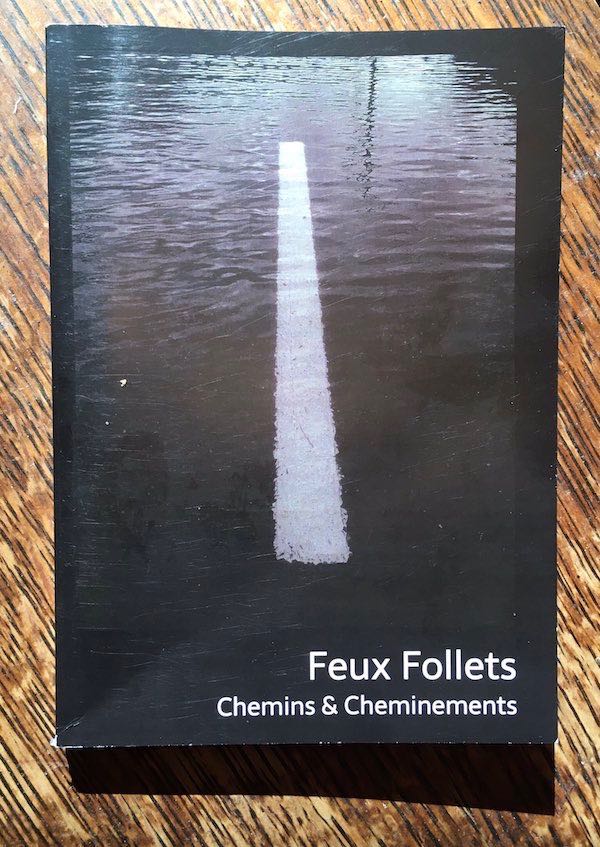 — Philip K. Dick. The Slave Race. With a Preface by Adam Newell and a frontispiece by Sharon Newell. Sangrail Press, 2020. Edition of 250 numbered copies. First 25 copies issued with an original blockprint initialled & numbered by the artist. A nice production.

— Megan Rosenbloom. Dark Archives. A Librarian’s Investigations into the Science and History of Books Bound in Human Skin. Farrar, Straus and Giroux, [2020]. This is an advanced philosophical subject. The prose does not rise to the level of the topic. Far more interesting and informative is Jennifer Kerner’s interesting study, Anthropodermic Bibliopegy, (2019). See also the archives for November & December 2009.

— Mark Valentine. The Blue Coronation Bench. Photography by Julian Hyde. Voices in a Lane, 2020. Edition of 40. The hidden mystery of the everyday.

— Michael Swanwick. Blue as the Moon. Dragonstairs, 31 October 2020. Stories for Hallowe’en. ‘White as a Sheet’ is brilliant: swift and utterly devastating in the spiral of its change in tone. 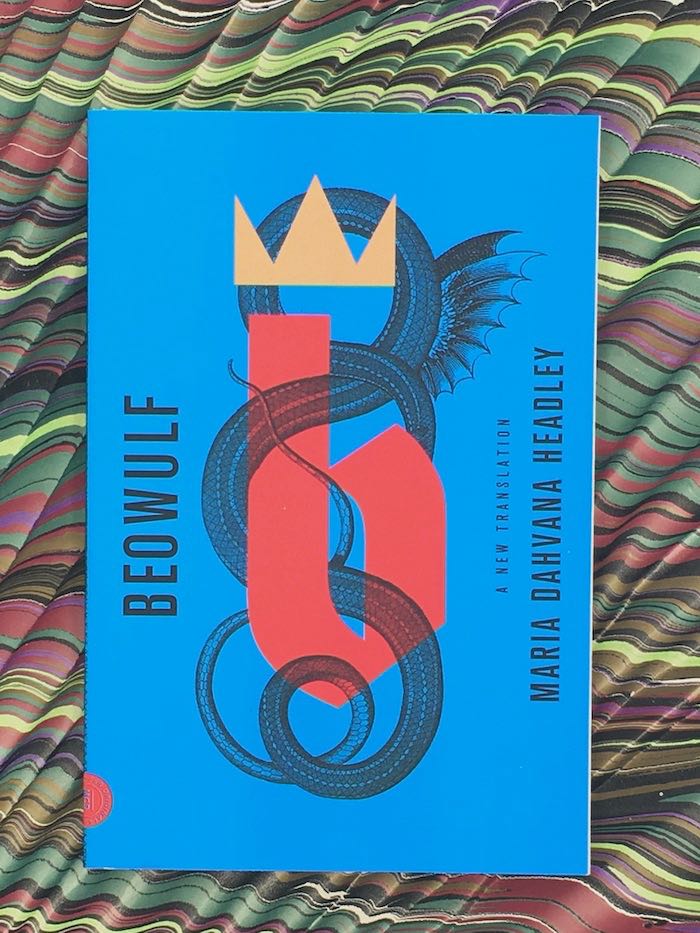 — Maria Dahvana Headley. Beowulf. A New Translation. MCD x FSG Originals, [2020]. Making it new: ‘stories that haven’t yet been reckoned with’ (from her introduction, dated on a distant day, 3 March 2020)

‘To begin at the beginning: The United States has always been a corrupt society.’ — Gore Vidal

‘Could it be that all these authors were not — as I had unthinkingly assumed — in subsidiary
traditions, but parallel ones? And that the only thing unique, superior to all others, and especially
important in my tradition — was that I was in it? Was centrality really a relative matter?’
— Joanna Russ, How to Suppress Women’s Writing

‘If, as a Black, Southern woman reader, I can find a way to connect to so many stories by other writers whose works don’t center me, then I know others can do the same when they encounter works that place them on the margins’ — Sheree Renée Thomas, in Locus

There is an exhibition of early ownership marks and other aspects of the physical evidence of reading, at the RAI Library in Barcelona La vida privada dels llibres del CRAI Biblioteca de Reserva, Barcelona https://crai.ub.edu/sites/default/files/biblioteques/Reserva/expo/index.php

The Temporary Culture website is fully functional and allows readers to purchase all current books of the press — including the new edition of The Private Life of Books — and a selection of other books and material of interest. https://temporary-culture.com