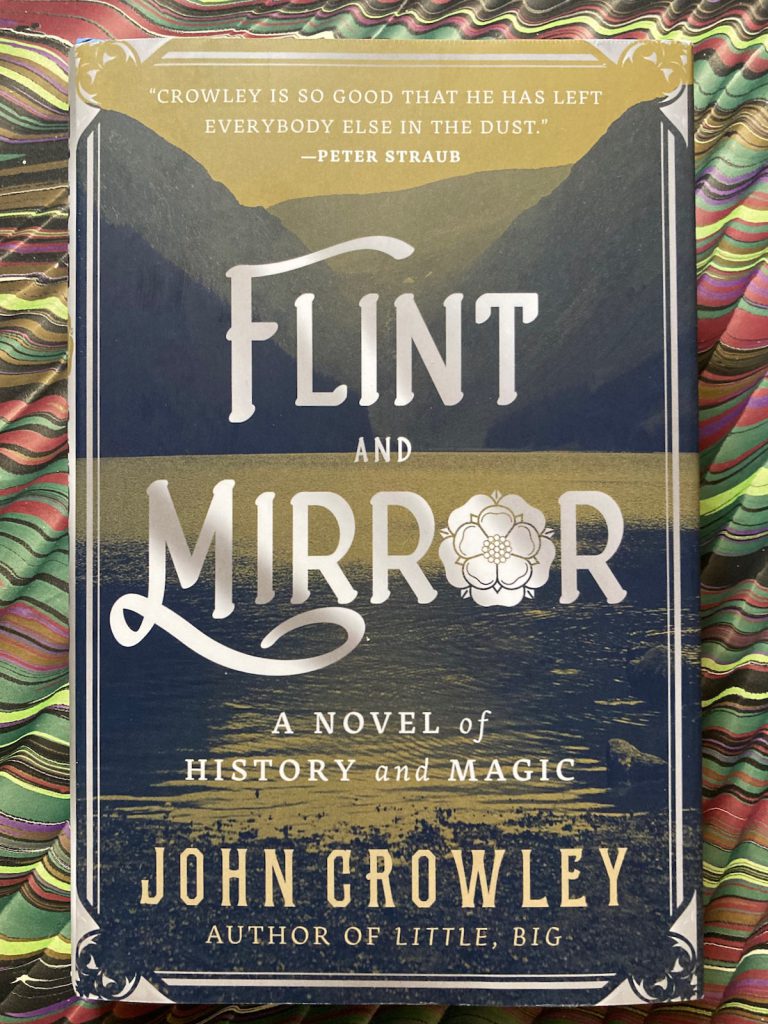 Stories are told again and again. It is the telling that haunts us, and which we remember in our ears and hearts. Flint and Mirror is unlike any of John Crowley’s earlier novels, for it is a closely constrained historical novel of the life and times of Hugh O’Neill (1550-1616), who almost succeeded in overthrowing English rule in Ireland in the 1590s. If the legend of King Arthur is the Matter of Britain, the Tudor invasion of Ireland is the monstrous and chiefly unacknowledged truth that fixed the pattern of English adventurism around the world for centuries to come. The invasions continued under Queen Elizabeth I, and in Ireland as elsewhere, English policies fostered disunity among those who might have resisted the expansion of settlements. As one of the heirs to Gaelic lord of Tyrone, the young Hugh, Baron Dungannon, was fostered with the family of Sir Henry Sidney, Elizabeth’s deputy in Ireland (and father of the poet). Hugh was presented to the English court, and Elizabeth later referred to him as “a creature of our own”. Hugh O’Neill returned to Ireland and was appointed to various lieutenancies in Ulster. While his “position then resembled that of the many English captains serving in Ireland, he was more adept in advancing his interests because his Ulster origins allowed him to operate within two competing worlds” (ODNB). The English thought perhaps they had shaped a useful pawn, but having been “raised from nothing by her Majesty”, O’Neill soon put his own ideas into action.

The “two competing worlds” at the heart of Crowley’s novel are not, however, those of the historian, or not quite. To the four ancient kingdoms of Ireland is always added the fifth, the domain of those who live under the earth and in the lakes and rivers. The evening before Hugh is sent to England, the blind poet of his uncle’s castle takes him out to a tumulus at twilight, and the boy is presented to “a certain prince” who gives him tokens of a promise and a commandment. And later, one of his tutors is the wizard Doctor Dee, who also gives the boy a small secret object binding him to Queen Elizabeth.

This is not Pavane, Keith Roberts’ beautiful book which rewrites technology to articulate a backward-looking alternate history, for Flint and Mirror is an account of how the English victory rewrote the nature of Ireland. Three centuries would pass before Patrick Pearse proclaimed the Irish Republic and invoked “the dead generations from which she receives her old tradition of nationhood”.

And yet. The entire novel is closely entangled with all the notions Crowley has always written about: liminal places, objects of power, consequences, Shakespeare, Doctor Dee, the fearsomeness of the Shee, imaginary books, and the changes of the world.

Hugh O’Neill’s childhood visit to the Earl of Desmond in squalid exile in London moves to a rich, astonishing image as the chapter concludes. And John Dee’s vision of the powers leaving Ireland in “no ships men sail, ships made out of the time of another age, silvered like driftwood, with sails as of cobweb” recalls the insubstantial armies and inconclusive battles of the war in Little, Big. Flint and Mirror is a beautiful book, sometimes elegiac in tone, and full of surprises.