‘You wake up feeling wonderful. But also, in some indefinable way, strange’ 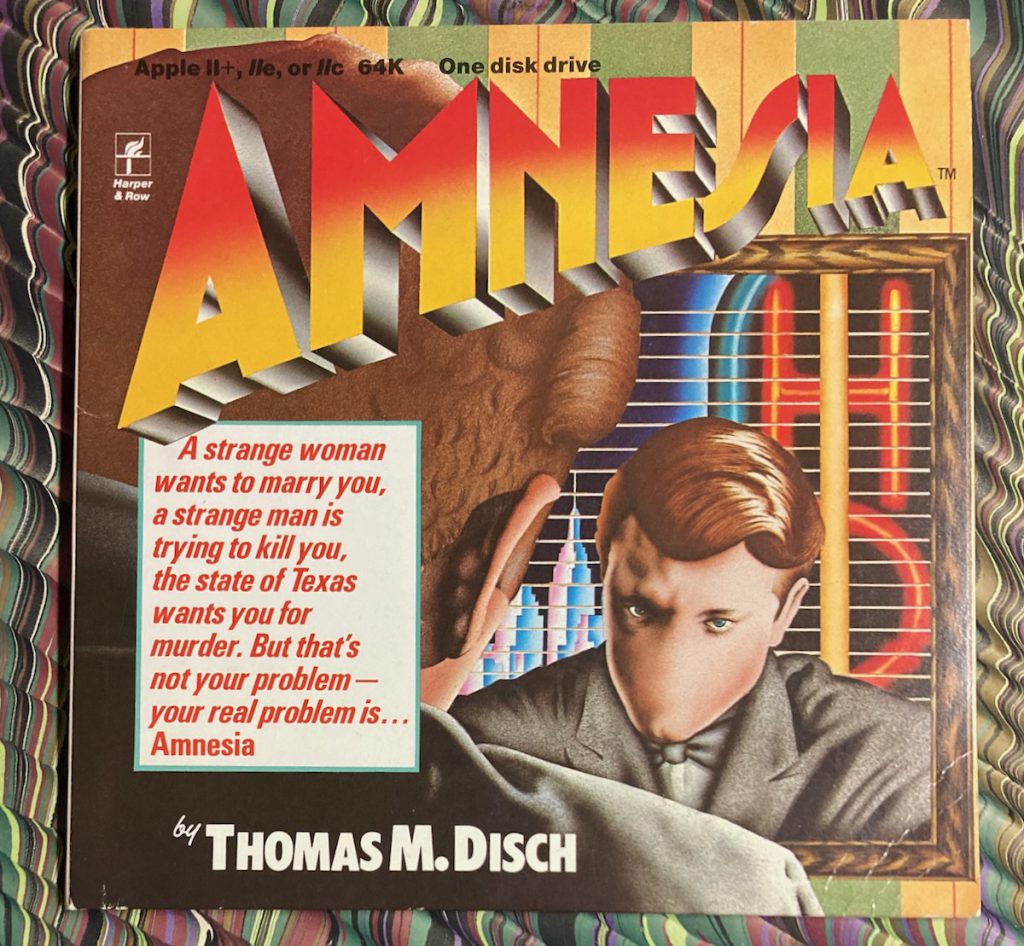 The other day Tom Lecky handed me something he found while tidying up his shop, Riverrun, or more precisely tidying up old stuff from its earlier existence when Chris Stephens ran it as a street-level open shop in Hastings on Hudson. Mr. Lecky (whom I call Tom but in a moment you’ll see why the usage remains formal) knew I’d be interested because when he first took over, I had bought the proof copy of On Wings of Song (1979) marked by Thomas M. Disch with corrections for the Gollancz publication of the novel. What Mr. Lecky  handed me was a pictorial printed sleeve for Tom Disch’s early interactive fiction, Amnesia, empty except for a printed map of Streetwise Manhattan (copyright date 1984) with a curious gold sticker on it, “compliments of the Sunderland Hotel” (not a hotel I had ever heard of). The sleeve is undated and bears a Harper ISBN 0-06-668006-9, and is signed by Disch with his formal signature. 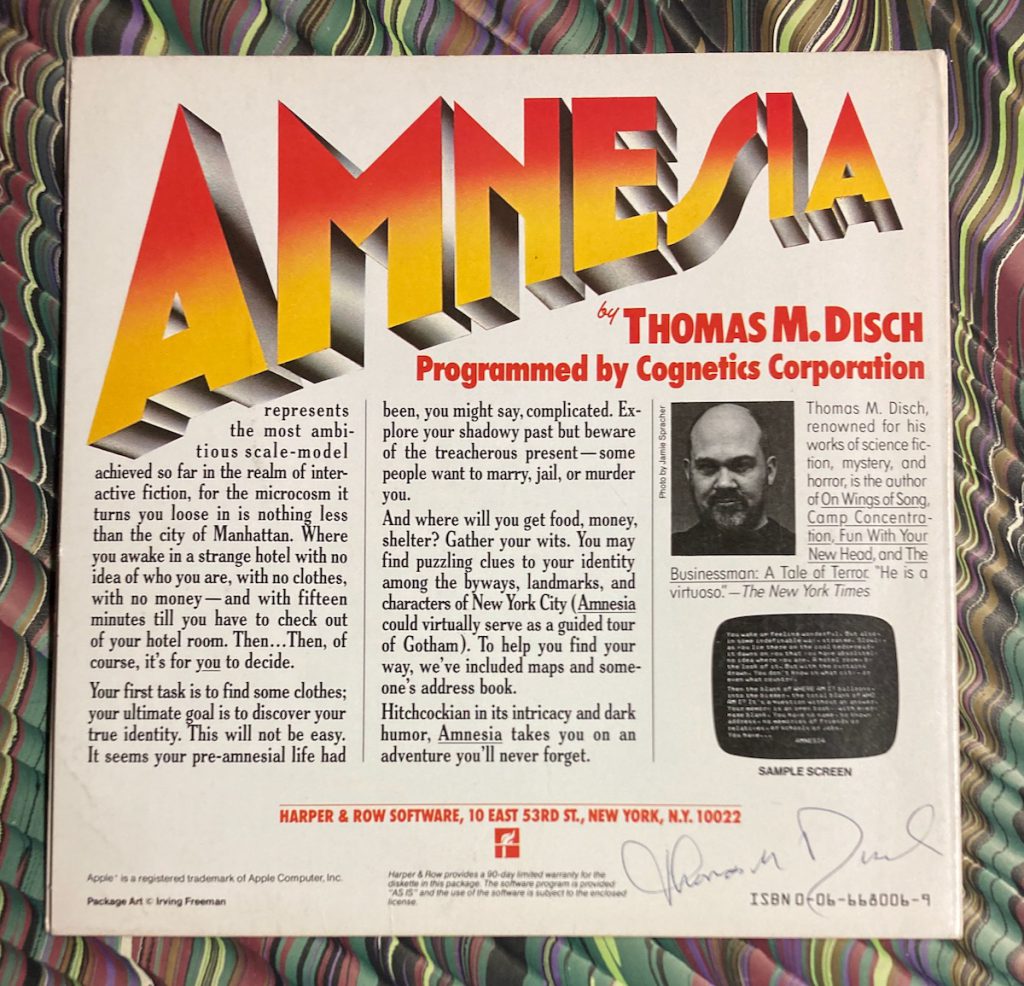 This a trickier object than it might seem at first glance, for it is a bibliographic ghost: the Harper and Row  Amnesia by Tom Disch never existed.

I’ve completed a computer-interactive novel, Amnesia, which should appear from Electronic Arts in May of 1986. For a while it was touch-and-go whether Amnesia would ever exist. Harper and Row Software contracted for it in the fall of ’83, and then a year later, when the project was halfway to completion, Harper and Row dissolved their software department before it had put a single product on the market, a decision dictated by considerations of accounting [. . .] and then when Electronic Arts took over Amnesia I returned to work on that. And now that’s done [. . .]

He was indeed a pioneer in this new field and Amnesia is a text of branching paths, beginning when the “player” awakens in a hotel room in the Sunderland Hotel somewhere in Manhattan with, as the Harper sleeve copy says, “no idea of who you are, with no clothes, with no money — and with fifteen minutes until you have to check out of your hotel room.”

The text adventure was published by Electronic Arts in 1986. Interviewed by Larry McCaffery in Across the Wounded Galaxies (1990), Tom observed

When you’re working on this kind of text, you’re operating in an entirely different mode from when you’re writing other forms of literature. [. . .] In a very literal sense, any computer-interactive text deconstructs itself as you write because it’s always stopping and starting and branching off this way and that. You are constantly and overtly manifesting those decisions usually hidden in fiction because, of course, you don’t normally show choices that are ruled out — though in every novel the choices that are not made are really half the work, an invisible presence. With Amnesia, I found myself working with a form that allowed me to display these erasures, these unfollowed paths.

The history of the Harper ghost is also well known. In the fall of 2008, Stephane Racle, a specialist in computer games bought an example of the Harper sleeve and a typescript  of Amnesia, the Script for my U-Dun-It, Disch’s text for the interactive adventure.

More recently, Rebooting Electronic Literature: Documenting Pre-Web Digital Media, volume 1 (2018), from the Electronic Literature Lab at Washington State University, Vancouver, includes a section on Disch’s Amnesia with a “traversal” or demonstration of the 1986 Amnesia, with a critical essay and links to reviews and earlier articles.