Peter Straub, who died on 4 September 2022, was the smartest of writers and a truly fine man. He was one of the few magicians I have ever met: that rare real thing, a writer who starts a tale in a recognizable place and enables the reader to go somewhere unexpected and unsettling. I  didn’t know him well, but saw him regularly over the years in New York and at Readercon, and I treasure his work. It was always a pleasure to hear him read from works in progress.

It was a signal honor and delight to moderate the panel discussing his writings when he was guest of honor at Readercon 23 in July 2012. It was a wide-ranging, zigzag conversation between Gary K. Wolfe, Mike Allen, John Langan, and your correspondent, discussing character, place, and story in Straub, as well as a host of other topics. In one exchange we drew attention to connections between minor characters across the decades. Peter was in attendance and we could witness his pleasure at the seriousness (and sly humor) with which we brought the vivisection of the Works . . . . In my introductory remarks I observed, “What is a book but the record of the struggle of a story to tell itself?” and I had been thinking of Shadow Land in particular,  but all of his works grappled with the relationship between story and form. Just take a look at the intensity with which he read Henry James: The Process (Is a Process All Its Own) (2017), contributes an episode in the life of the Master which no other author could have conceived and told. The Dark Matter (2010) is another fascinating work.

In September, his daughter, novelist Emma Straub, wrote a succession of posts on twitter, beginning here , and a very moving memoir of her father, This Time Tomorrow, Today.

That Readercon panel was followed by a convivial dinner gathering — not a table of doom — with many (but not too many) luminaries. Peter inscribed my copy of Shadow Land, which I included in A Conversation larger than the Universe. 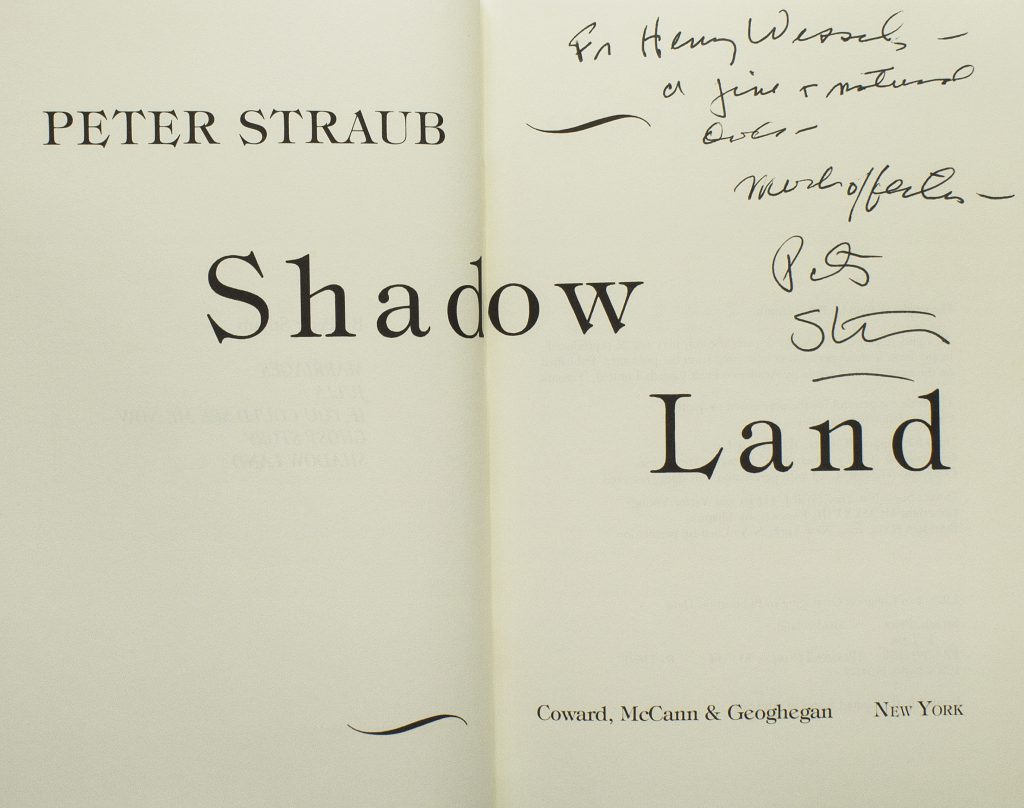 The photograph at the top was a rare late public appearance, when Peter attended the birthday celebration organized by Derrick Hussey of Hippocampus Press for critic S. T. Joshi in June 2018.

As my friend Liz Hand (present at that Readercon dinner) remarked after learning of Peter’s death, “count none but sunny hours”. Peter Straub was a Mensch, with a big heart, and I am glad to have known him.