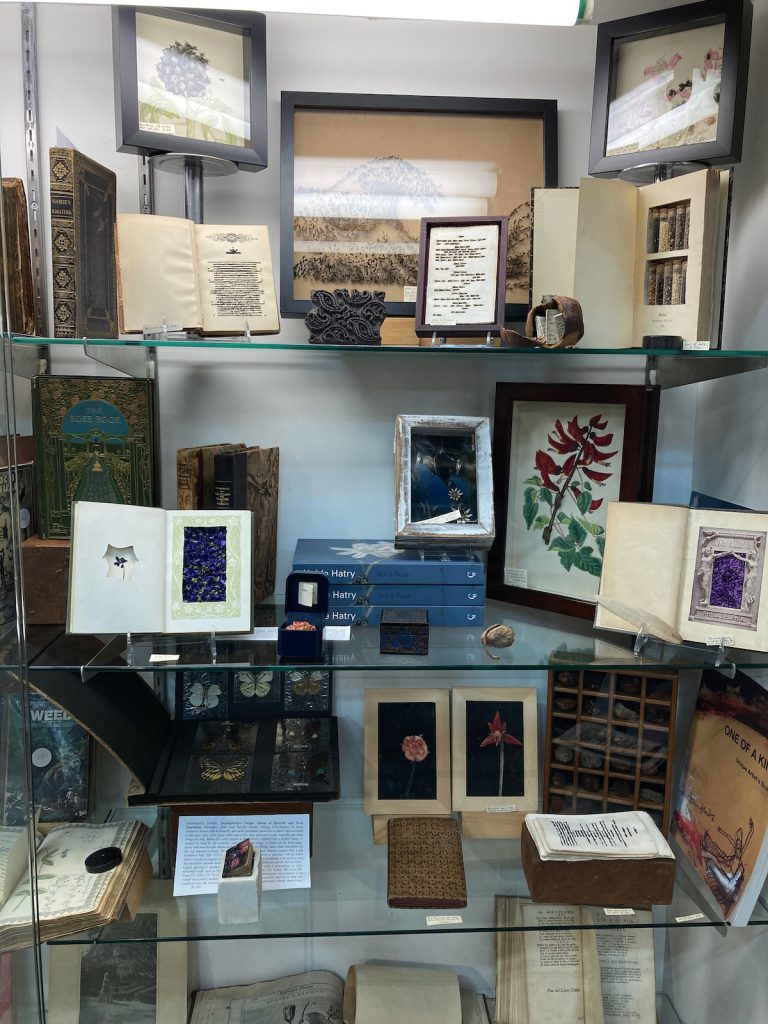 The most striking vitrine I saw at the recent New York Antiquarian Book Fair was this display of the artist books of Heide Hatry and related botanicals at the booth of Sanctuary Books. Hatry’s transformations are playful and  provocative, and gorgeous to hold in the hand. 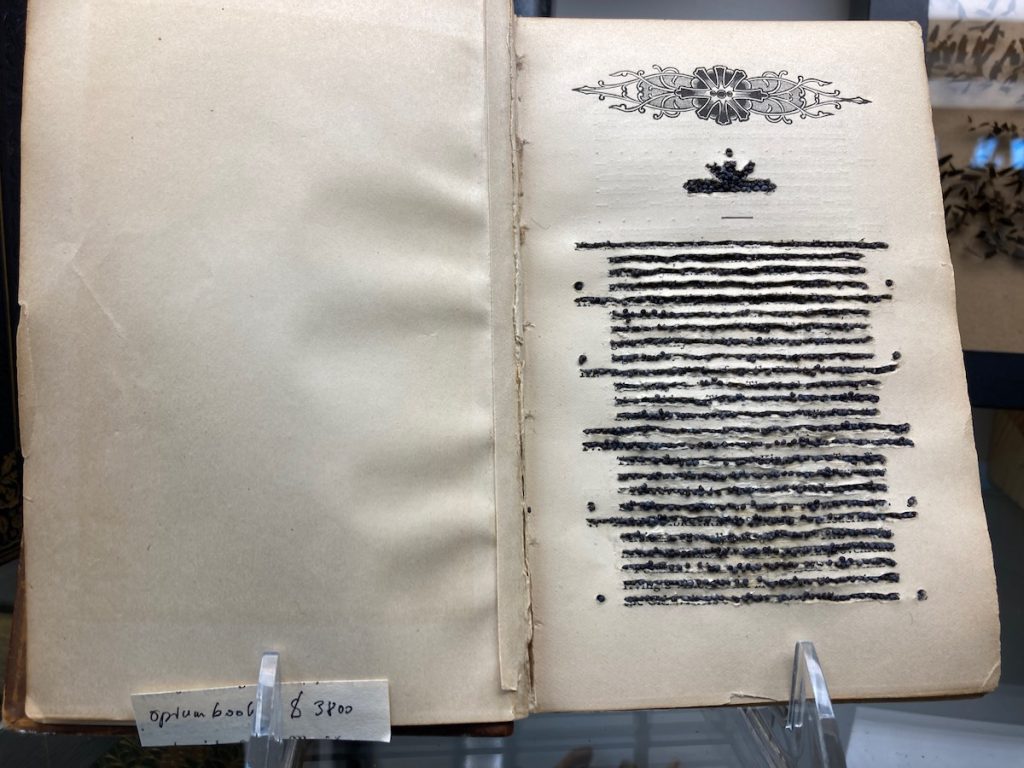 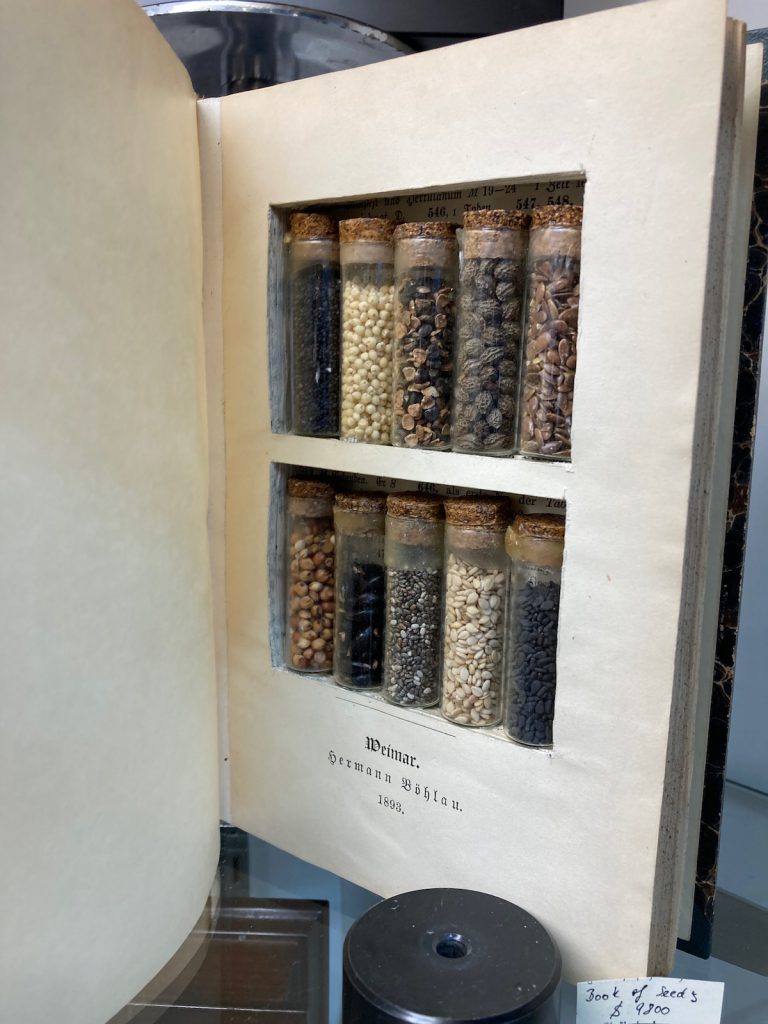 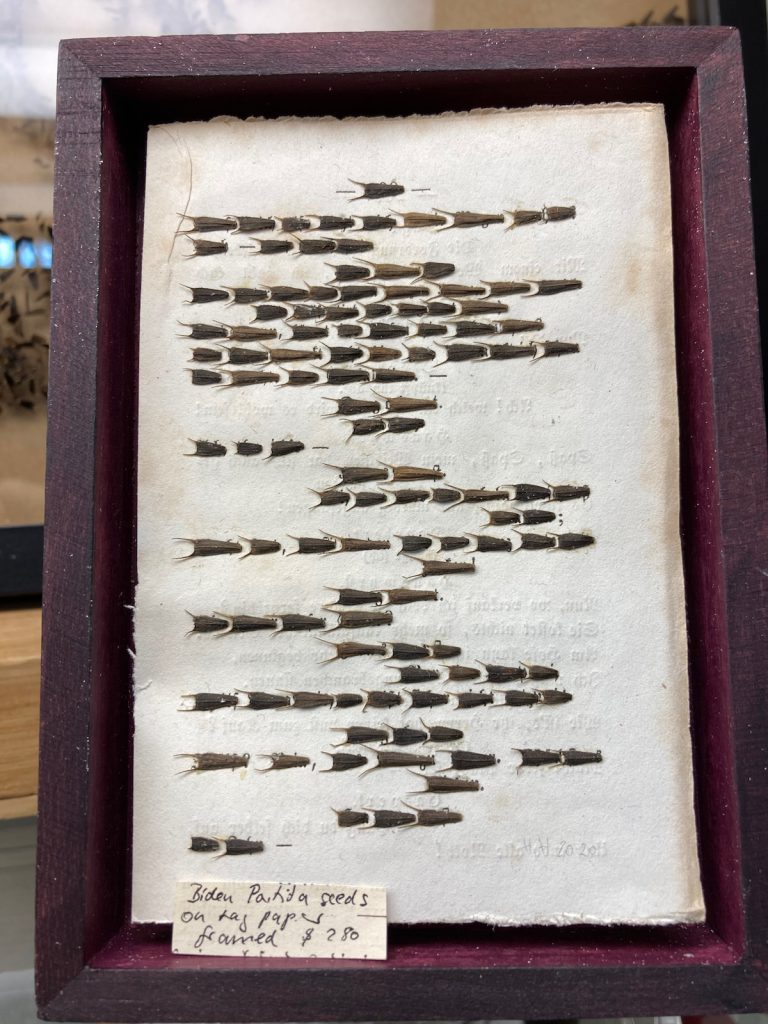 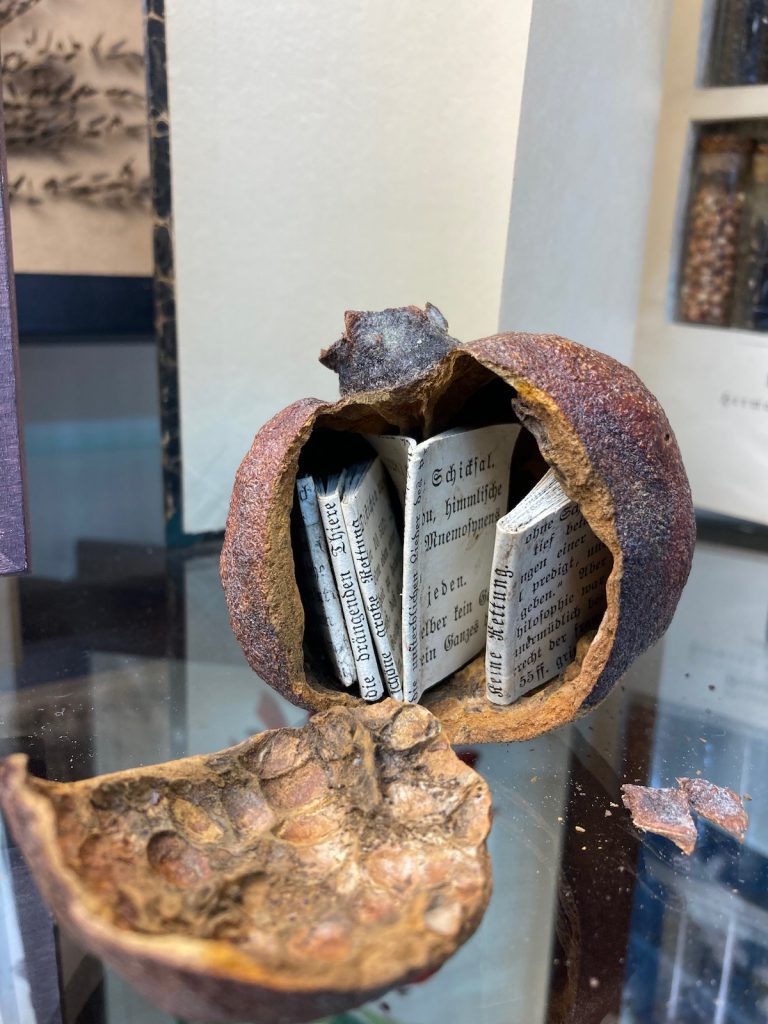 [Secret library in a pomegranate.] 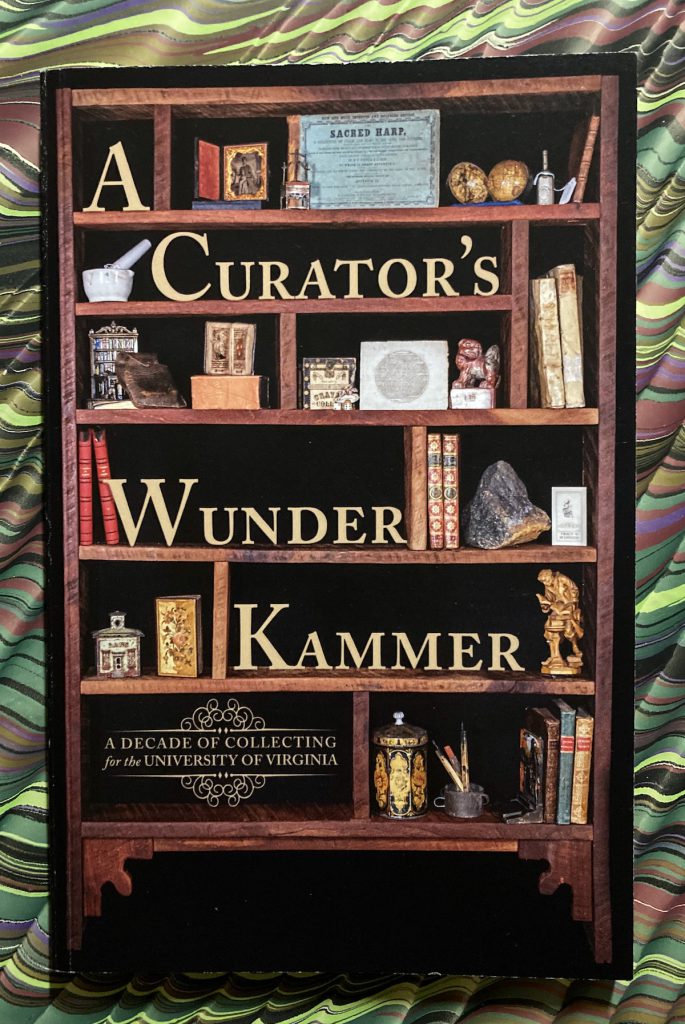 — David R. Whitesell. A Curator’s Wunderkammer. A Decade of Collecting for the University of Virginia. Exhibition Catalog. [Charlottesville: University of Virginia Library], 2022. Illustrated throughout. [iv], 105 pp. Edition of 500 copies [in fact, 310]. $25.00.
David Whitesell’s Wunderkammer exhibition is a retirement party in material form, a late career greatest hits selection of sixty-four books, manuscripts, and ephemera he bought for Special Collections at the University of Virginia Library during a decade at as curator at the Small Special Collections Library at the University of Virginia (previously he was at the American Antiquarian Society for many years). The exhibition runs through July but information seems meager on the UVa website, so I will treat this catalogue as my invitation to the party (complete with a transcript of all the speeches!) and write about it.
A Curator’s Wunderkammer includes is divided into five broad categories: Jefferson, Virginia, & American History (23 items); English Literature (5 items); American Literature (7 items); Printing, Publishing & Book Arts (19 items); and Omnium Gatherum (10 items). Boundaries are usually a lot  fuzzier than people think, and here, too: many of the items in the Omnium Gatherum have an Americana flavor.  This is only a tiny selection from some 15,000 items Whitesell purchased, but they document the curator’s energies and the range of materials that he has seen.  The items include a Jefferson manuscript and the diary of a young lady growing up in Virginia during the Civil War (this is after all, Jefferson’s university);  the first novel by an American-born author; a rare Boston imprint of Meat out of the Eater and Day of Doom; the decorative wrapper for  a ream of paper from a Hartford Mill; a memoir of a Bavarian soldier in the first world war; a private manuscript anthology of the poet Chatterton; and a fragment of Washington Irving letter, just before his career took off with The Sketch Book.
Whitesell pays attention to poetry (he was editor of Roger Stoddard’s  monumental  Bibliographical Description of Books and Pamphlets of American Verse Printed from 1610 through 1820). Notable here are a family copy of an early American utopia in verse, The United Worlds (1834), which conclusively identifies the author, and The Eucleia (ca. 1865), a nonce collection of the works of William Cook, mendicant poet and self-publisher in Salem, Mass., reflecting Whitesell’s interest in “nineteenth-century non-canonical verse”. And then there is the rare and remarkable and potent America and other poems by James Monroe Whitfield (Buffalo, 1853). 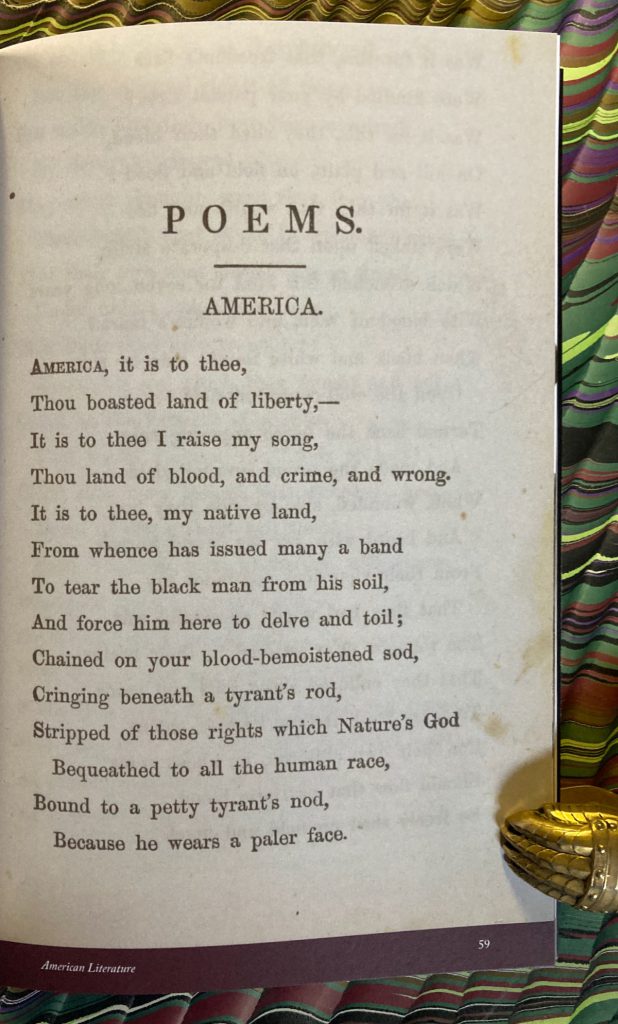 The last item in the catalogue is the manuscript of an essay, “La biblioteca total”,  written by Jorge Luis Borges for Sur (August 1939), which is identified as a precursor of the story, “La biblioteca de Babel” (The Library of Babel), published two years later in El jardín de senderos que se bifurcan. No wonder he describes this as “the prize, and if I must choose, my favorite UVA acquisition”.
In this catalogue Whitesell names the booksellers from whom he purchased materials (this aspect of the history of the object is usually omitted); and so this catalogue becomes a an account of relationships between the antiquarian trade and a knowledgeable institutional buyer. He writes discursively on his selection process and the constantly changing nature of the book trade. This is a fun catalogue.

[Note: The colophon states 500 copies printed, but due to paper shortages only 310 were in fact printed. If you want one, best to act soon.Details: https://at.virginia.edu/wunderkammer]

The news is out. A BOOK OF RYHMES, a miniature manuscript book created by Charlotte Brontë in 1829 and unseen for more than a century, will be displayed and offered for sale by James Cummins Bookseller and Maggs Bros. Ltd. on 21 April at the New York Antiquarian Book Fair, at the Cummins booth (A4). Sometimes the best stories in the antiquarian book trade can never be told, so it is a delight to see this one become part of the public history of world literature. 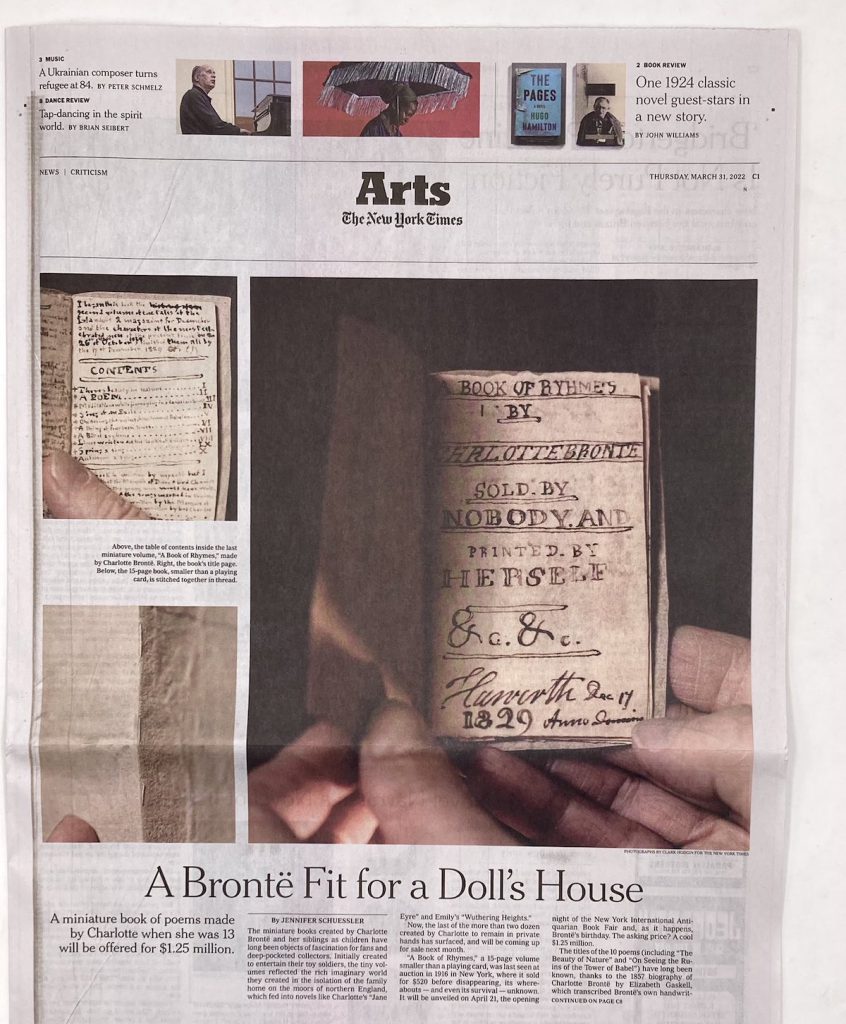 Jenny Schuessler wrote an excellent piece for the New York Times, A Brontë Fit for a Doll’s House, or, A Tiny Brontë Book, Lost for a Century, Resurfaces, discussing the intense private world of the Brontë children and the persistent interest in their manuscripts. Schuessler elicited a beautiful response from biographer Claire Harman on looking into this unpublished manuscript (Harman’s observation also demonstrates that bringing Alice in Wonderland into descriptions of subjective experience always makes the world a brighter place). The first time I saw one of the Brontë manuscripts was more than a decade ago at the British Library, when the exhibition Out of This World. Science Fiction but not as you know it (2011) presented Branwell’s map of Glasstown and surrounding lands and The History of the Young Men (Ashley MS 2468), as well as writings by Charlotte and Emily.
It’s a nice to have a brief role in the long history of this manuscript, and to be part of this joyous chapter in the history of the book trade. See you at the book fair.
A description of the manuscript follows:
BRONTË, Charlotte. A BOOK OF RYHMES. By Ch[a]rlotte Bronte. Sold by Nobody. And Printed by Herself, &c., &c. Haworth, Dec. 17, 1829, Anno Domino. 15, [1, blank] pp. 32mo (4 x 2-1/2 inches). Haworth: October to December 1829. Stitched in brown “sugar paper” wrappers, titled in ink on upper cover. Some toning to leaves. Alexander 8. Provenance: Charlotte Brontë; Rev. A. B. Nicholls; sold at Sotheby’s 19 June 1914, lot 193, “Property of Mrs. A. B. Nicholls, Widow of the late Rev. A. B. Nicholls, whose first wife was Charlotte Bronte”; Walpole Gallleries, 17 November 1916, lot 32.
This beautiful miniature manuscript book of poem by Charlotte Brontë, aged 13, is known from the transcript of CB’s own catalogue of her books in Mrs. Gaskell’s Life of Charlotte Brontë and was sold at the dispersal of the effects of the second wife of Rev. Nicholls, whose first wife was Charlotte Brontë. The manuscript was last seen in public in November 1916 when it sold at auction at Walpole Galleries in New York.
A Book of Ryhmes comprises : i). The Beauty of Nature; ii). A Short Poem; iii). Meditations while Journeying in a Canadian Forest; iv). Song of an Exile; v). On Seeing the Ruins of the Tower of Babel; vi). A Thing of fourteen lines; vii). A Bit of a rhyme; viii). Lines written on the Bank of a River one fine Summer Evening; ix). Spring, a Song; x). Autumn, a Song. xi). Contents.
On the verso of her title page, Charlotte writes: “The following are attempts at rhyming of an inferior nature it must be acknowledged but they are nevertheless my best.” At the end of this Book of “Ryhmes” she refers to the secondary world created by the Brontë children amongst themselves but clearly asserting her authorship and creative control over that world:
“This book is written by myself but I pretend that the Marquis of Duro & Lord Charles Wellesley in the Young Men’s World have written one like it, & the Songs marked in the Index so * are written by the Marquis of Duro and those marked so † are written by Lord Charles Wellesley.” At the head of the page she also alludes to one of her best known early productions, Tales of the Islanders: “I began this book, the second volume of the Tales of the Islanders, 2 magazines for December, and the Characters of the most Celebrated Men of the Present time on the 26th of October, 1829, & finished them all by the 17 of December, 1829”. She has signed the small book no less than twelve times during its composition.
— — — 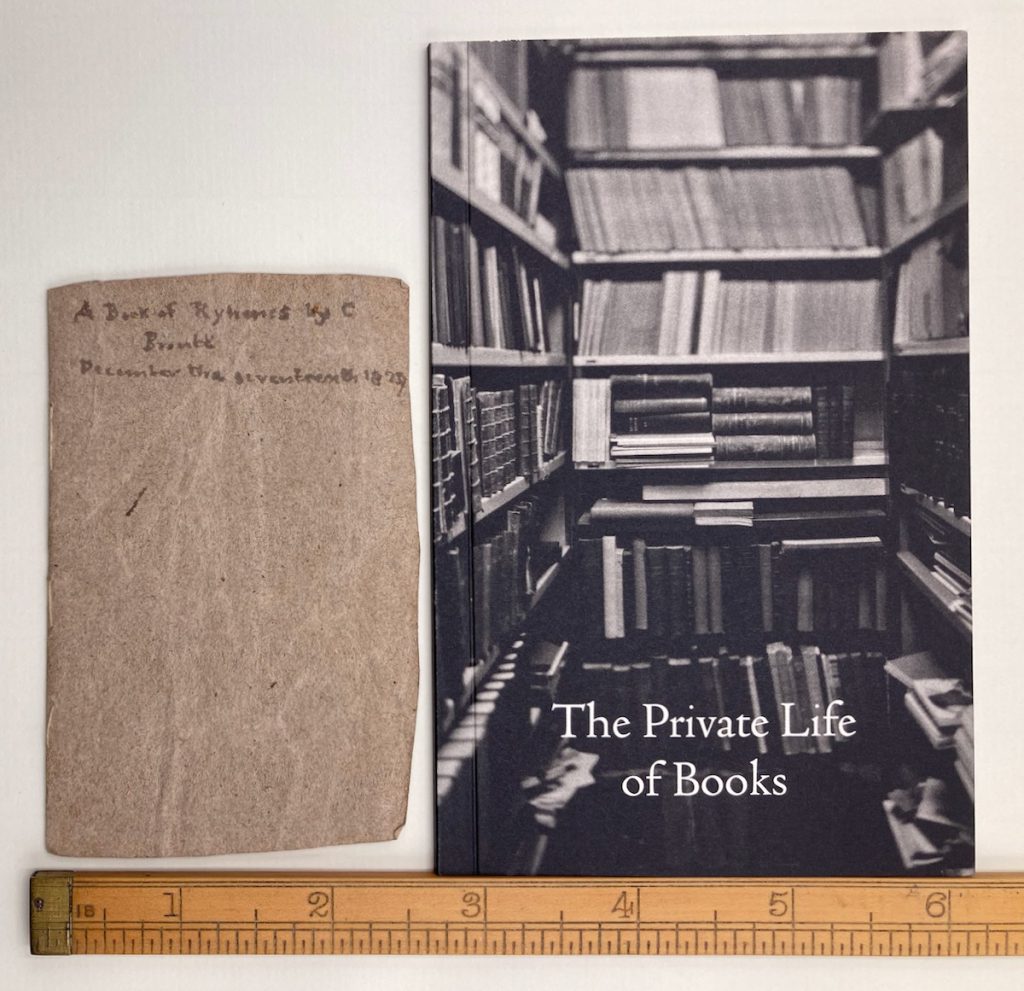 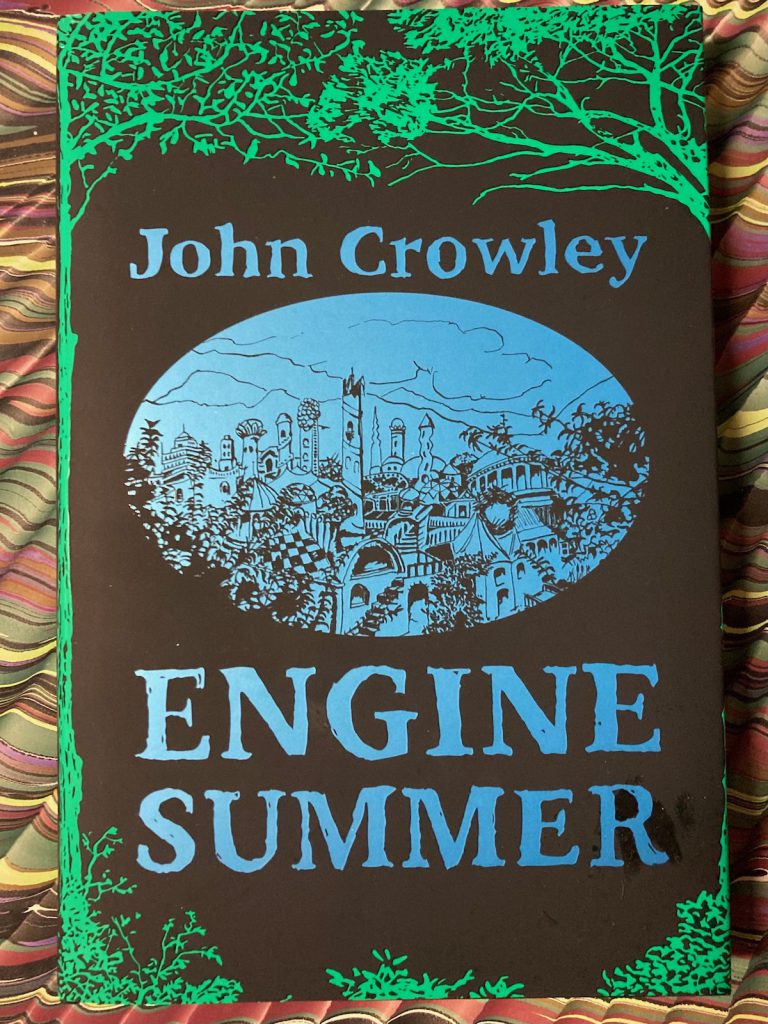 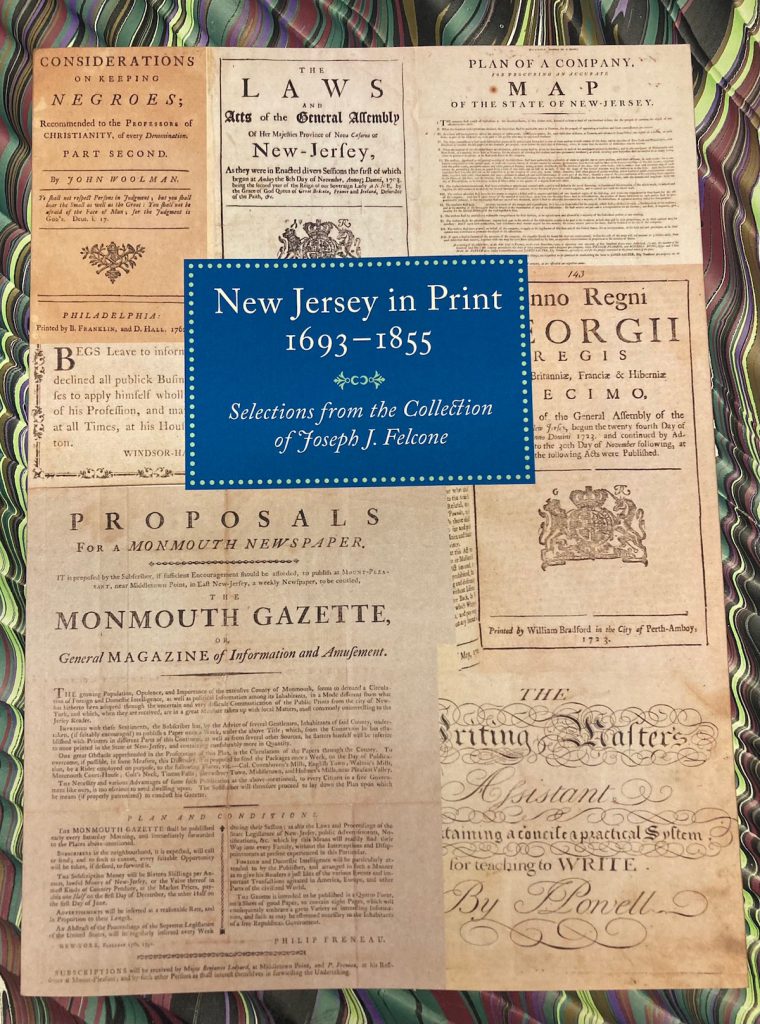 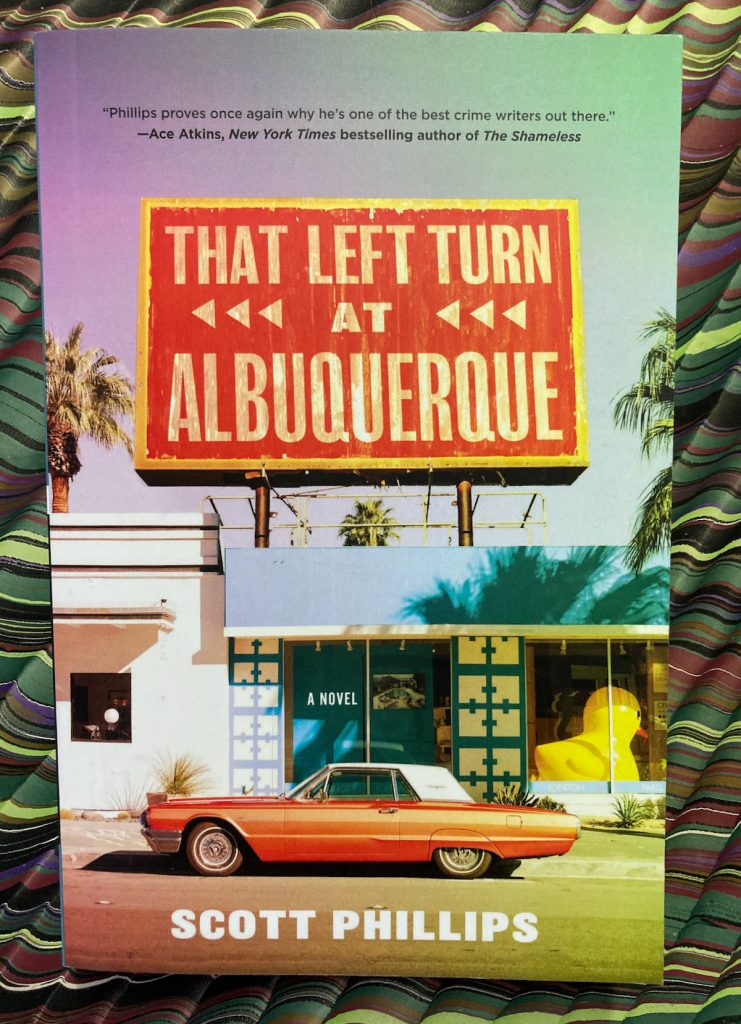