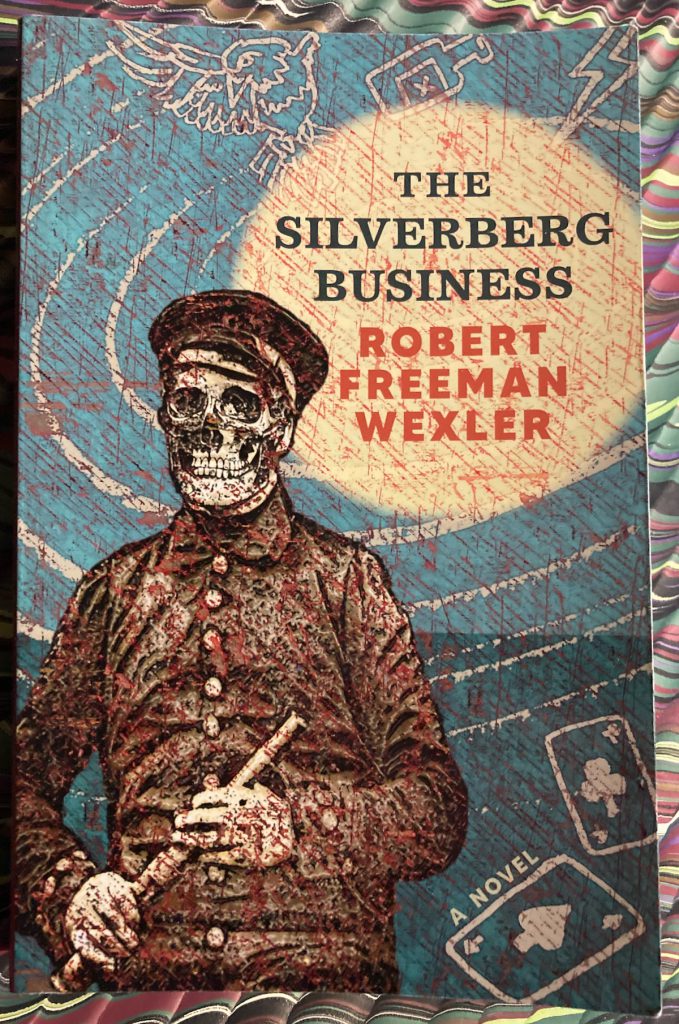 The Silverberg Business follows Shannon, a Jewish private detective who has come to Victoria, Texas, in late October 1888, in search of information about a missing man and the large bank draft he carried, representing funds raised on behalf of a Romanian Jewish refugee settlement plan. Shannon, a Galveston native with a talent for finding bodies, uncovers fraud and murder, and indications of concerted sinister activity in and around southern coastal Texas. We get a clear sense of the “feel of a frontier town” in Victoria, and the people living there. Shannon gets knocked over the head on several occasions. He works for a Chicago agency and has considerable autonomy. The detective talks, and listens to people from all walks of life, bankers and bank clerks, railroad conductors and bartenders, laundresses and rooming-house owners, marshals and horse dealers, gamblers, whores, and rabbis. In the course of his narration, Shannon drops elements of his own history and character. His tenacity of purpose leads him into strange places, and the reader goes with him, out into sparsely populated terrain, and elsewhere.

Shannon’s first-person narrative voice is matter-of-fact, smart and aphoristic, and keenly observant of his surroundings. He is Hammett’s Continental Op on the ground in 1880s Texas, which would be interesting enough, but Wexler also reappropriates the Western as a literary domain,  and goes farther even than William S. Burroughs did in The Place of Dead Roads. Wexler’s achievement is to have created a formally innovative fiction that moves seamlessly, and beautifully, from dream to waking to sensory hallucination and then back to the mug of coffee the waitress has set before Shannon in the dining room at the Delmonico Hotel. He soon discovers that Silverberg, an Easterner, was seen in the company of a well-dressed Westerner with bad teeth and a gambler named Stephens. A conductor describes Stephens: “whitish hair, somewhat taller than average, red-brown eyes, a tendency toward fancy dress.”

Was Stephens the man who walked past the hotel restaurant and stared in at me? White . . . blond . . . storm of white-capped waves gouged the coast . . . an oak that had stood for centuries screamed and gave up its life . . . nothing remained, nothing but naked earth twisted into shapes of the dead and dying. I cried for the land, but what use are tears?

Stephens wears an onyx ring with a Greek god carved into it, and demonstrates a capacity to come and go as he pleases. There is often a stench of sea rot as the mark of his passage.

Pursuing the gambler, Shannon saddles up his horse, Blue Swamp, and rides out of Port Lavaca towards the  ruined town of Indianola, which had been flattened by an earlier hurricane. He spends a couple of  nights camping, fishing and shooting ducks for his meals, befriending a one-winged bald eagle, and has strange dreams. The next day as he gets near Matagorda Bay, the noon sky turns dark. “Reddish light washed the salt-cedars and cactus.” When his Blue Swamp refuses to move further, Shannon goes ahead on foot and finds an unexpected sand hill on the barrier island.

Sand hills form, blow apart, re-form, eventually becoming immobilized by growth of sea oats, goateed, and other plants. This one was crusty, bare, more like sandstone than sand, and the front looked sculpted, carved into features . . . curl of lip, open mouth, deep eye holes. A rotting animal festered in the mouth.
Then I found the body.

It is the murdered Silverberg. When the weather turns inclement, Shannon passes the night at the  farm of Ratface Conroy. Out  in the tumble-down barn, “a lean-to strung together from broken parts of other structures,” Shannon’s sleep is interrupted when his hosts attempt to murder him. Shannon shoots the husband and goes after Mrs. Conroy, who is armed. Pushing through a curtain in the sod farmhouse, Shannon enters a giant, ruined stone mansion. He shoots her dead, and returns to find a zombie “skull-head” Conroy armed and awaiting him. Shannon is faster at the draw, and sets the house ablaze as he leaves. This is not the last of the skull-heads Shannon will encounter.

There’s a lot of poker in The Silverberg Business, stud poker where only the first card is dealt face down to each player, and all the other cards are visible upon the table as they fall. This is emblematic of Wexler’s narrative method, for the reader sees what Shannon sees, and patterns are deduced from evidence visible and from inferences about what remains concealed.

Time is a hill, a hill that grows as you climb, grows to mountainside. Wind and rain alter the mountain, exposing rock, minerals. Looking back the way you came gets harder. Sometimes, all you can see is the rising path ahead of you. You get to the top. Everybody does. Sometimes sooner than we expect. The journey is what matters. Here in skull-head land, time means nothing.

These fugues and hallucinations and strange dreams are integral to the way Shannon gains knowledge of the strange world he enters. And the reader  enters with him, for his voice is supple enough to take in this space outside of time, poker-playing zombies, and a daring escape in the Flying Kestrel, a contraption from the Sonora Aero Club, across a landscape of perpetual intertemporal war. Abandoned in a Louisiana swamp by the pilot of the Kestrel, he finds that months have passed.

The measure of Shannon’s persistence is seen in the way he makes his return to Victoria and resumes his investigation of the gambler, no matter the cost. Among further clues are strange manuscript account in Spanish recording the indigenous culture of the region, and a pattern of inexplicable land purchases on barrier islands. On a visit to the prison in Huntsville. Shannon finds the prisoner he expected to interview has been murdered.  Chasing Stephens down a stairway that couldn’t exist, Shannon finds himself again in the land of the skull-heads, and the poker-playing begins in earnest. The stakes couldn’t be higher.

In a review of an exhibition of paintings by J. M. W. Turner, critic Jackie Wullschläger useful articulates the notion that Turner’s work began to push “beyond realistic description”. As readers and writers, all we have are words, but sometimes that is sufficient. The Silverberg Business is a book that demonstrates what fiction is all about.

Continuity is a convenient illusion. The discontinuities of Shannon’s subjective experience — dream, beautiful maritime interludes, fugue states, hallucination, or return to consciousness after getting clobbered on the head — are as cut-up as anything from Burroughs, and the psychological and geographical terrain of the novel are vast spaces, but Shannon is unflappable, no matter how weird it gets. The Silverberg Business is linear and direct in its narrative line even as the words dance across time and space from sentence to sentence within a single paragraph.

I wasn’t sure I would be able to function . . . I . . . Stephens, looming gigantic , his red eyes roasted my flesh. Shriveled strips floated on the waves, adhered to the sides of the boat, and the ocean, all its weight above, squeezing me into nothingness. I swam into a cave, a cavern so vast it held the world, and beyond, the sparkling Mediterranean of Salonica’s harbor. Captain Bellis gave the order “Moor ship!” and our boat thumped into the remnants of a Galveston pier.

Wexler’s prose is shocking, funny, and vivid, and can go anywhere, and he goes to some very strange places (the summary above leaves off about halfway through the book, so buy the book and read it).

In The Silverberg Business, there are also countless playful allusions to elements of American literature high and low, among them Winsor McCay’s Little Nemo; Dashiell Hammett and William S. Burroughs, as noted earlier; and, though his name is nowhere mentioned, H. P. Lovecraft, especially in the sense of menace and the notion that human actors would be serving malign powers and non-human entities. The Silverberg Business is also a notable evocation of Jewish life in late-nineteenth century Texas. Wexler’s narrator unifies all these many fissiparous elements, and the concluding passages are tragic, deeply earned, and very moving. An outstanding work, the best book I’ve read this year.

The Endless Bookshelf book of the year 2022.